“To dismiss something without an investigation of the evidence is the height of ignorance.”
–Albert Einstein

Once more I realize that I have forgotten that most of the visitors to my site have not read Jesse’s book and therefore are missing pieces of the puzzle. With this in mind, I am going to begin work on a new page which
will consist of excerpts from Jesse’s handwritten letters which were published in the book.

The copies will be made from my own copy of the rough draft of the book. As you will see in the brief excerpt below, Jesse intended for the book to be “ours” from the beginning…never to belong to just one person in our tiny group.  I, on the other hand, always thought of it as Jesse’s book…he did write the largest part of it himself. It is his thoughts and memories which are expressed within it’s pages.

These are all letters which Elvis/Jesse wrote directly to Dr. Hinton.

Because Jesse agreed to allow these letters to be used in the book, I have no qualms about sharing them here on my web site. As I have stated before, Jesse’s letters directly to me are private and I won’t display them without his explicit permission.

Tom, mentioned in Jesse’s letters, is my husband. 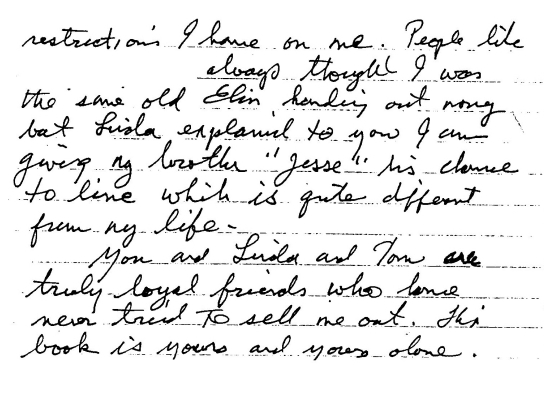 Below you will see Elvis/Jesse’s entire handwritten introduction to his book. He explains some things about why he left us on August 16, 1977 as well as some of the reasons for his book. 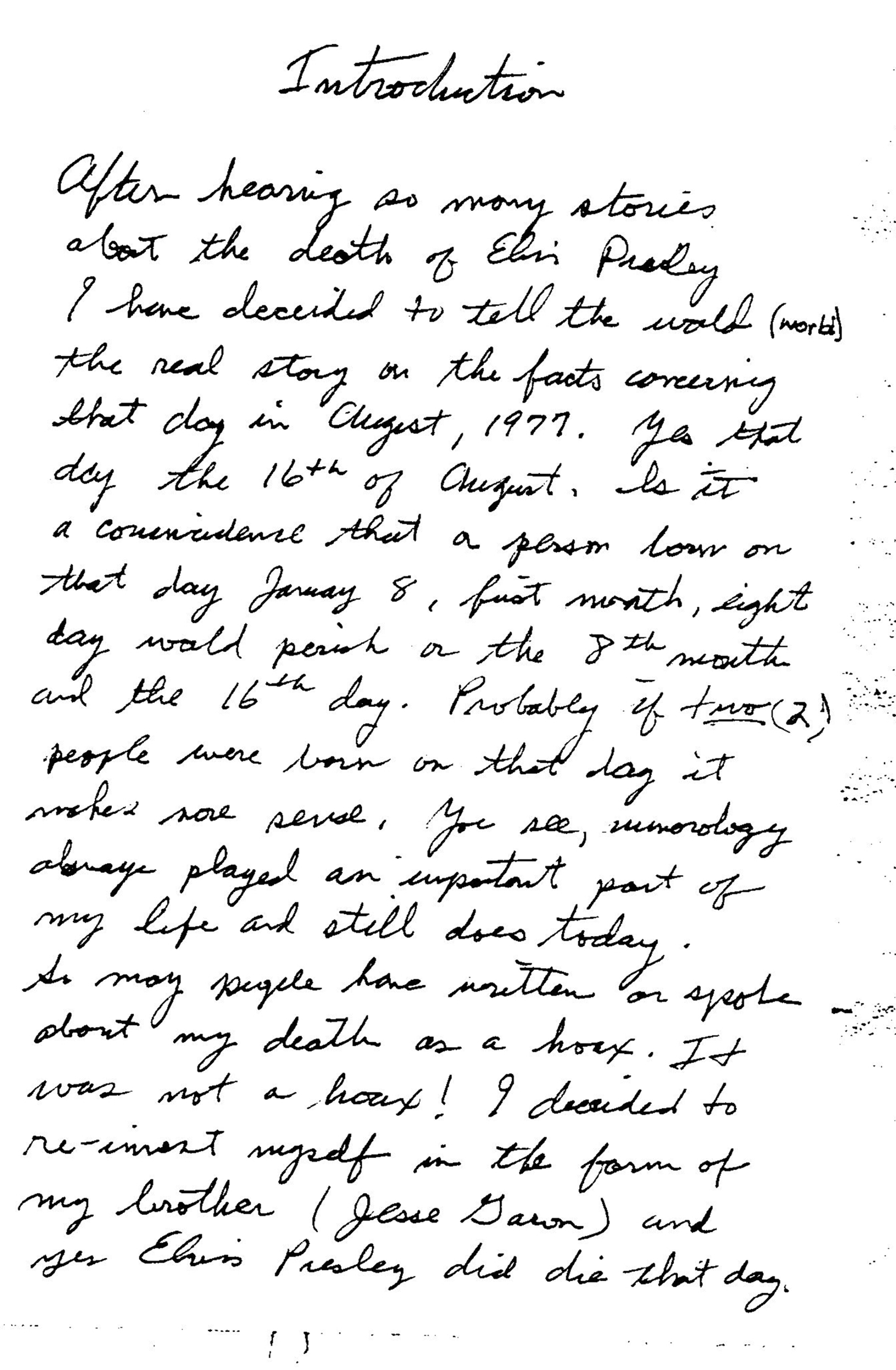 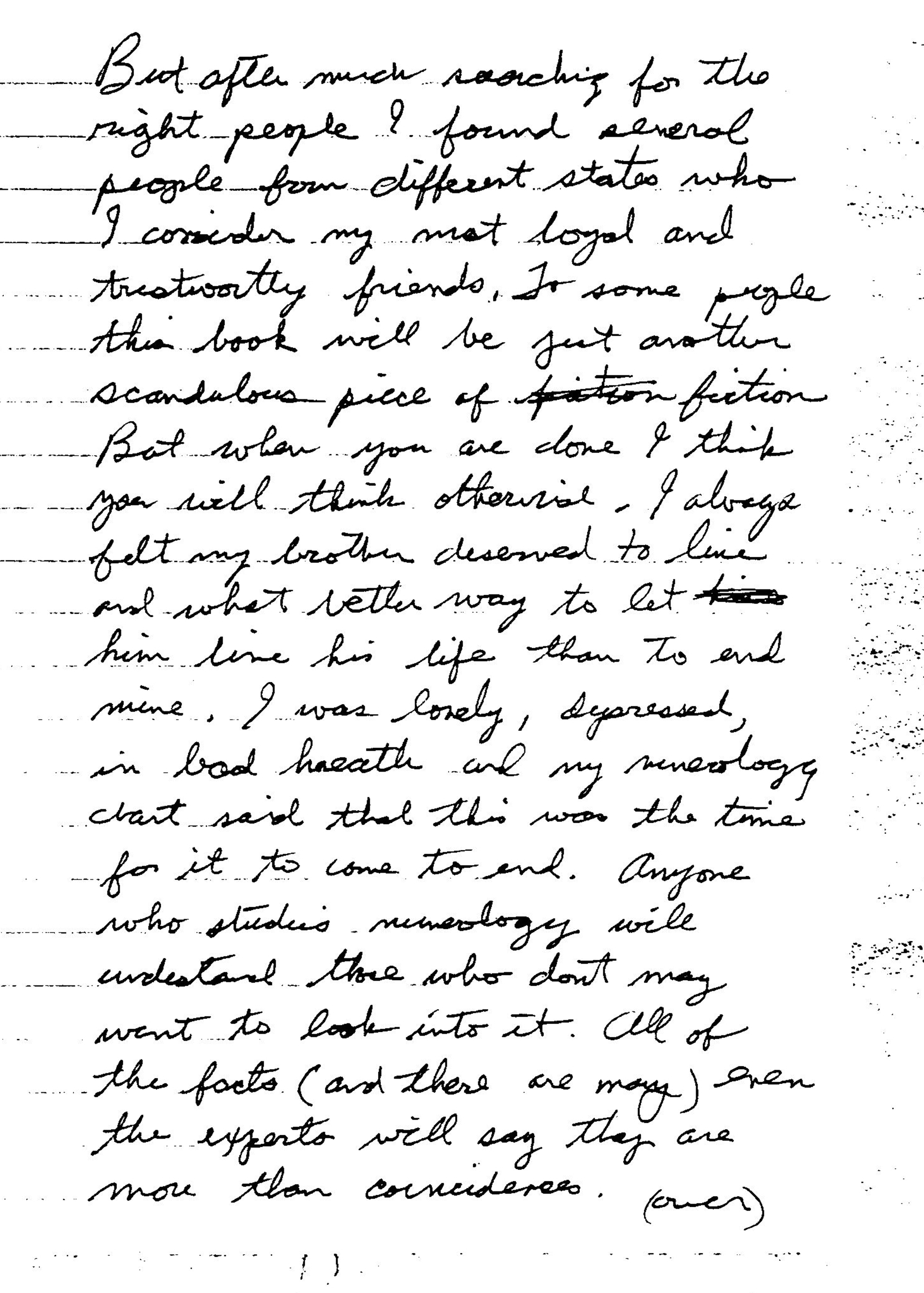 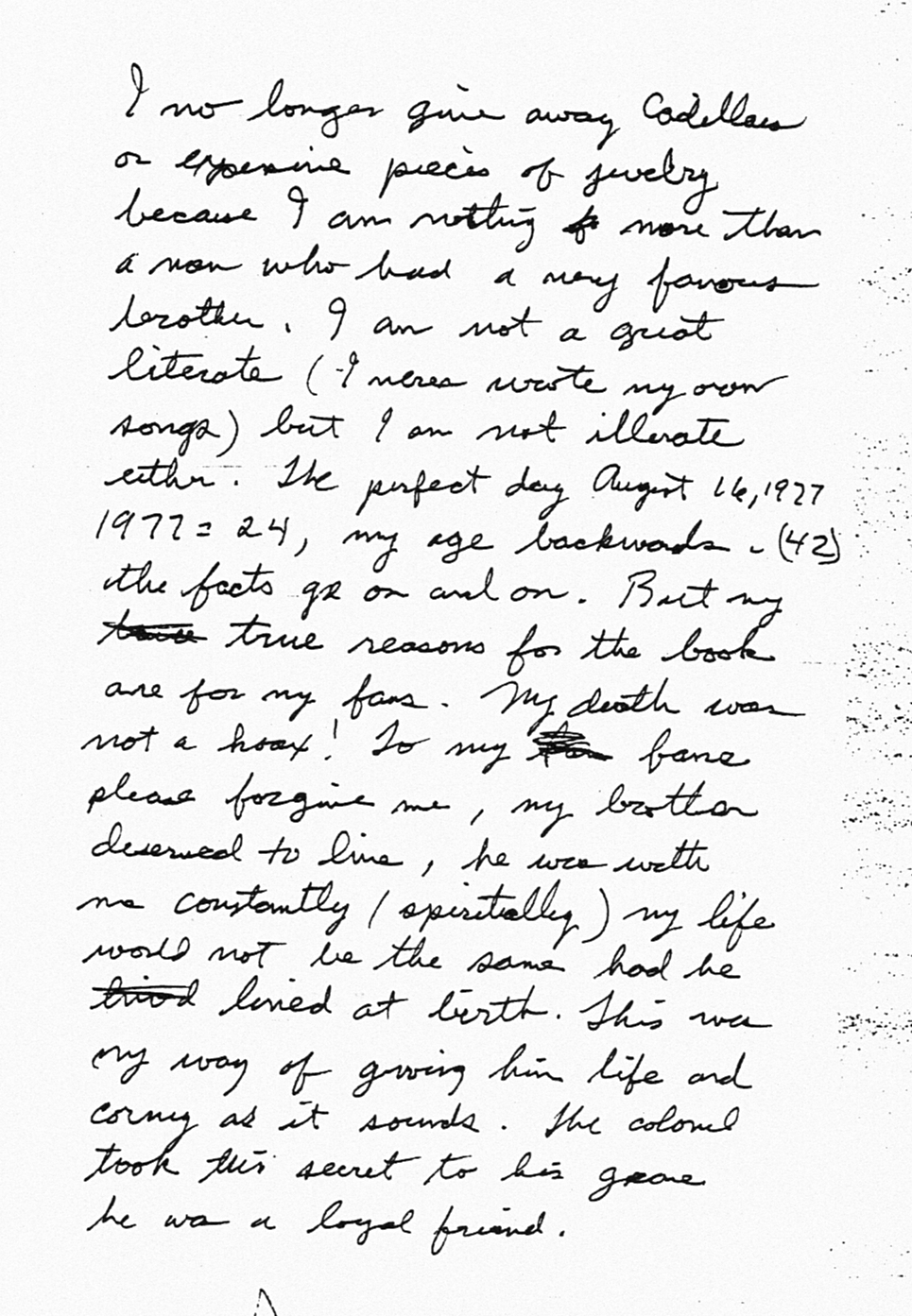 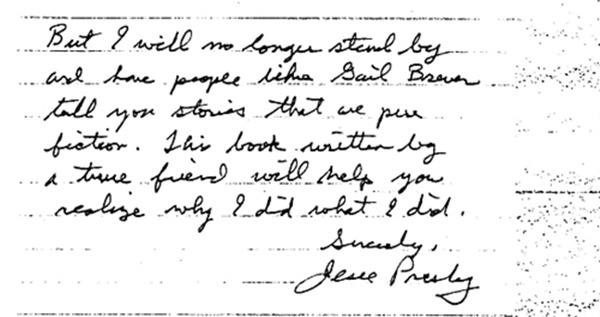 In the following page from one of Jesse’s letters you will see where he gave Dr. Hinton permission to place the photo of him with Benjamin in the book.

Until the day that Jesse himself called and told me to make copies and send them to Dr. Hinton for the book, no copy of the photo which he sent to me in July 1997 had ever been made nor had the original ever left my house.

All the copies of the photo which are “out there” now are the result of Dr. Hinton’s allowing others to have copies made from the photo which I sent to him. Since, others have posted their copies on the Internet and since the photo was shown during the FOX 8 reports, I decided that I no longer had control over what became of Jesse’s photo. So now it is on my web site. Please see my page devoted to this photo with Benjamin from 1994. 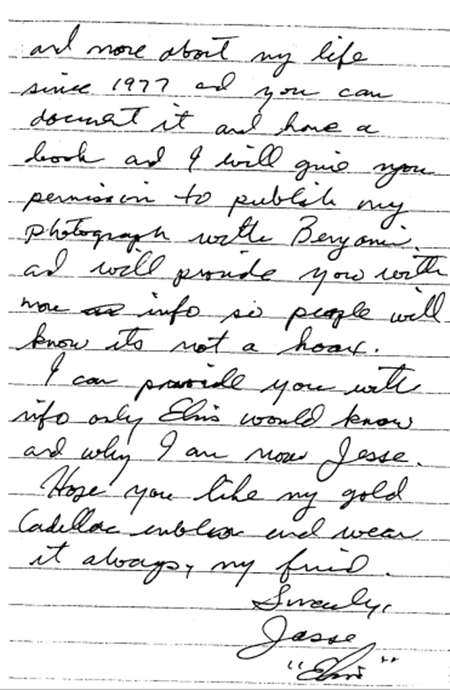 Photo of Jesse with his grandson Benjamin page.

Below is a page from another of Jesse’s letters in which he explains some more of the reasons that he had to leave us in 1977. 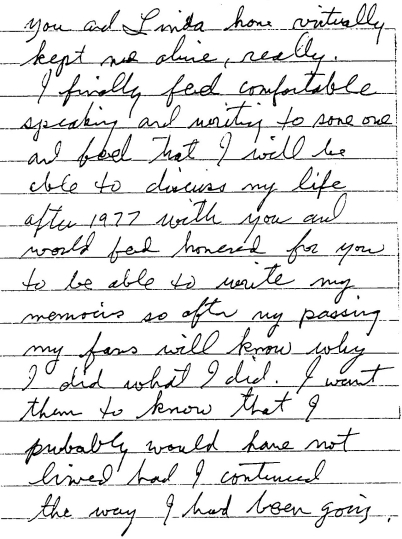 Below you will also see where Jesse made the comment about not being completely satisfied with the results of the plastic surgery….which explains the fact that he does look slightly different in the photo with Benjamin. Again, the bone structure has not changed at all…not one bit.

Also, he tells of being recognized in Miami while participating in police work and not being able to continue doing that type of work which he had envisioned.

Also, he mentions having told me about how his “so called friends” have written books detailing intimate details so they could make money. 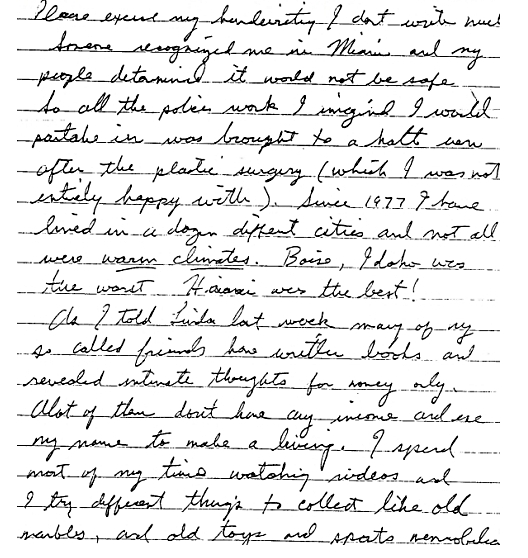 Here are two excerpts from Jesse’s letters in which he told about the police work he did after 1977…until he was recognized.  He also states, once more,  that he did have some plastic surgery with which he was not too pleased. 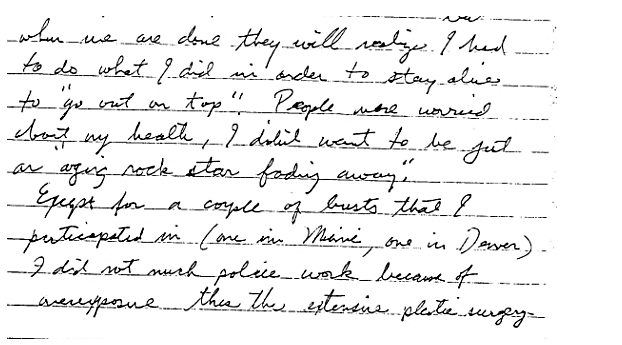 He also states how very important loyalty is to him.

Also, it is so very important to him that the fans understand why he did what he did. 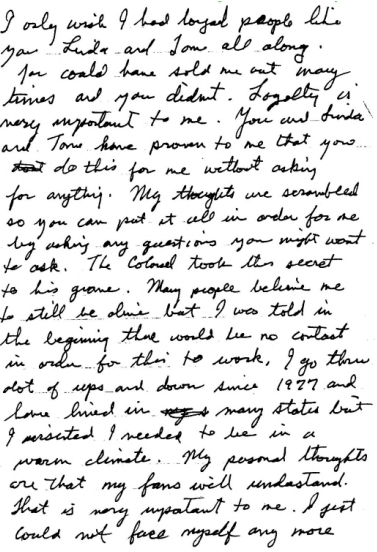 The following is from a letter which Jesse wrote to Dr. Hinton regarding publishing the book in 2002 rather than after Jesse’s actual death.

However, when Jesse and I spoke recently about the book, he said “That book should have never been published until after I am gone.“

This leads me to believe that I was correct in my suspicion that Dr. Hinton pressured Jesse into publishing the book before Jesse wanted it to be done. After the book was being published in 2001, Jesse said to me “I was not through. I had more things I wanted to tell.“

Dr. Hinton is a psychiatrist and knows how to manipulate one’s thinking…so…?

The following is the next page of the above letter still discussing 2002. 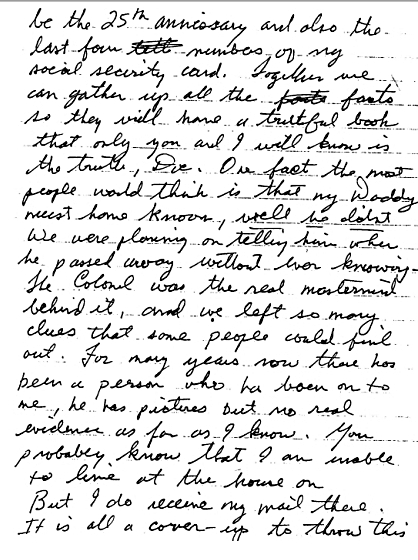 ADDITION OF ANOTHER HANDWRITTEN
LETTER

It occurred to me that, even though I have the letter below on another page of my site, I have failed to enter it onto this page with other copies of Jesse’s handwritten letters. So, I am adding it to this page for those who missed seeing it on the first page on which I placed it.

Prior to Christmas in December, 1999, Jesse wrote to Dr. Hinton and sent him several gifts for Christmas. The following is a copy of his handwritten letter from my copy of the rough draft of the book.

As you will see, he sent Dr. Hinton the pajamas which went with the robe he had sent to Dr. Hinton previously. But most importantly, he sent the pair of cuff links which Ann Margret had given to him upon completion of their movie “Viva Las Vegas” in 1964.

Dr. Hinton only placed the typewritten transcript of Jesse’s letter in the book, so I believe this handwritten letter will be something special to those who have not seen it before. Also, shown are the cuff links themselves.

Jesse had spoken with me in advance of his trip to Graceland to pick up the cuff links. He had to slip in at night unseen to get them from his bedroom where they had been since 1964.  As you will read, Jesse did not want them to be “sold at any auction“. 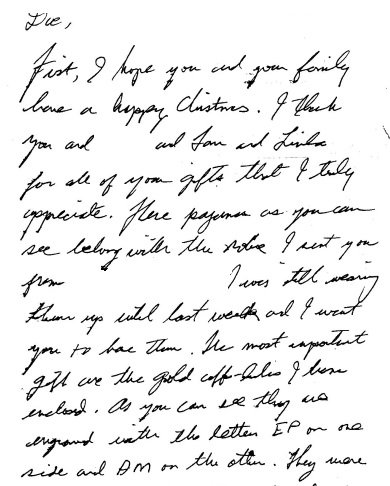 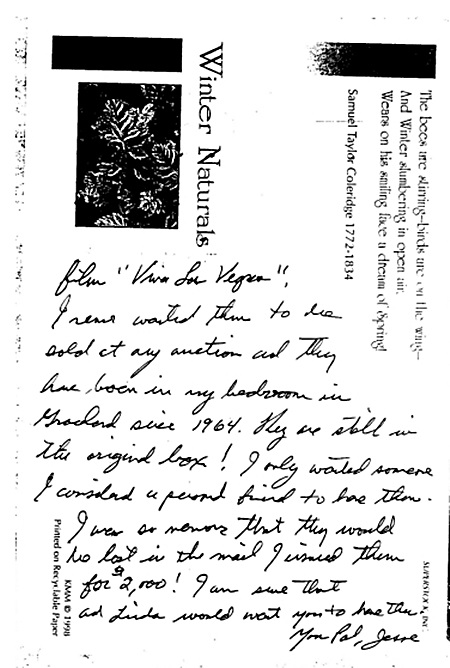 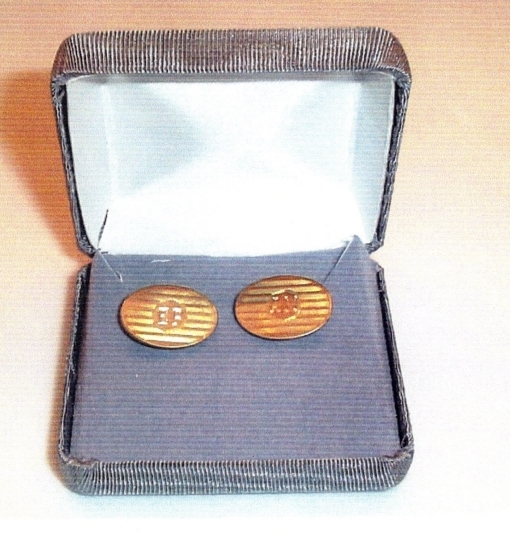 Although the letter below did not appear in the book, I feel it should be included on this page.  Jesse wrote to the Attorney General of Missouri in December, 2002 in Dr. Hinton’s defense against groundless complaints filed against Dr. Hinton for mail fraud.

The Attorney General cleared Dr. Hinton of all charges of fraud after it was verified that this letter was written by Elvis Presley who is now Jesse.

Please visit my three pages devoted to this letter and the graphologist who did the analysis.

ALL PAGES FOR THIS TOPIC:

Jesse’s letter to the Attorney General of Missouri written Dec. 2002