Choose who must hold the title of

PLEASE VOTE ONCE EVERY DAY!!!

This month marks the 25th anniversary of my very first contact directly from Jesse.  As I have done in past Aprils, below are the copies of my first two post cards from him.  I have edited out the names of others who were mentioned by him in the cards as well as the location which was mentioned and the location on the post marks.  I also, of course, removed my own mailing address.

The way Jesse became aware of me about two years before he contacted me directly was through my news letter which I published for nine months in 1990-1991.  So, I knew of him through some mutual contacts and he knew of me through my newsletters and those who were in personal contact with me.  So, we go back together farther than 25 years.

But, it was April, 1992 when he first contacted me directly himself and made me ecstatically happy.  I feel so very blessed and honored to be his close and trusted friend to this day.  I will stand strong by him until both of us are no longer on this earth.  He truly is family to my husband and myself.  We love him so much. 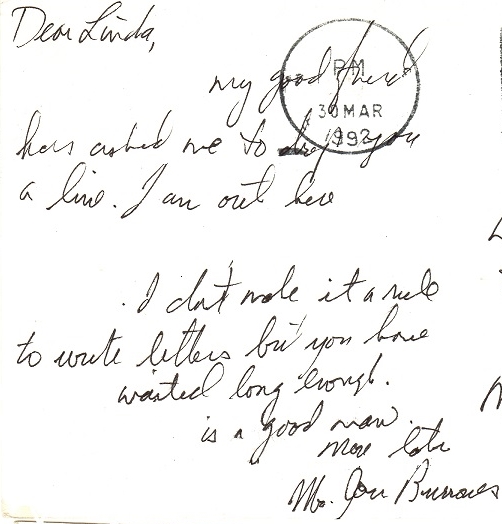 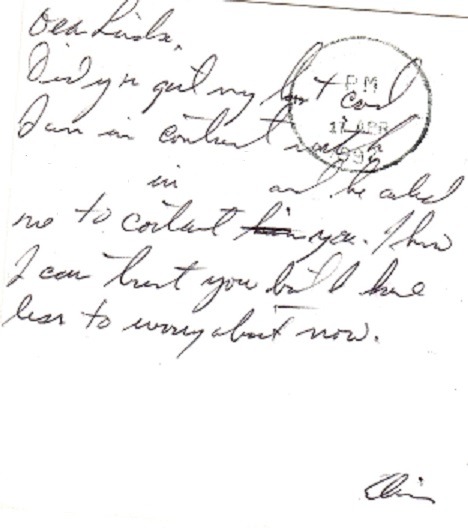 As you can imagine, I cried for happy when I read the above sweet cards.  My heart just melted when I read “…you have waited long enough.“

My sweet cousin gave me this Elvis fan which has an ad for a show of the Alfred Wertheimer collection of Elvis At 21 photos.  This show is going on now until October for those who care to visit the website listed on the fan itself for location details.  As for me, I just love looking at the fan!

I recently saw a book for sale of which I had been unaware.  I decided to order a copy and am pleased with it since it arrived a few days ago.  I have not read the book through yet…but from what I have glanced over, I do like it.  I appreciate so much the scholarly approach in which this book is written.  It is a biographical book which highlights the impact which Elvis has had on the culture of our nation and the world.  I will display below the cover and foreword of the book in case any of my visitors may also be interested in this book.  I do explain, though, that this is not a very long book.   Also, I caution that the price for a new copy is quite high.  I purchased a used copy myself and was lucky to receive a signed copy for a reasonable price.

I purchased my copy from Amazon.com.  Below is the link to their page for the book.

Below is Amazon’s description:

Known the world over as the King of Rock ‘n’ Roll, Elvis Presley still holds an enduring influence on our society that reaches across borders and puts everyone in the world on a first name basis with him. Echoes of Elvis, originally a Smithsonian Institution National Portrait Gallery exhibit of the same name, examines how Elvis’ story and widespread fame fit into the greater framework of American culture. Each chapter explores a different aspect of his life to determine and explain his cultural legacy.

One of my Facebook friends, Kathy, shared the below with me and I liked it very much.  My thanks to Kathy.

Just so tired of being “Elvis Presley“…

I hope that Jesse will forgive me for sharing this photo on here.  He once told me that he could never look any worse than he did on that last tour.

Does anyone notice that this is one of those extremely rare photos of Elvis on stage?  He is wearing no rings.

Below is an excerpt from an interview with Charlotte Stewart who played Miss Beadle on the TV show Little House on the Prairie.  She also appeared in the Elvis movie Speedway and had the following to say about Elvis:

I thank my good friend, Jeannette, who shared the below video showing the Scouts Day at Graceland.  Such a nice event to inspire the children.

Boy Scouts and Girl Scouts from across the country spent the day at Graceland for Scouts Rock at Graceland 2017!

Let’s don’t forget to vote everyday for Elvis on the King of Music site. thekingofmusic.com.

I also vote for the song and album of ages at the links below.
songofages.com
albumofages.com

WE CAN VOTE IN EVERY CATEGORY ONCE EVERY DAY!!!

Right now, Michael Jackson is leading Elvis on all three categories. This will NOT do!!!!!

Elvis is not very far behind and if we all jump in and start voting faithfully everyday, he can still win for the month of April.

SENT TO JESSE THROUGH THIS POINT

Just want to let everyone know that Jesse just called me a few minutes ago.  He is doing OK…all things considered.  He has been having some dental work done and cataract surgeries on both eyes as well.  So he is in the healing process from the procedures.  But, he sounds good and is on the mend.  I have been very concerned about the things he has been going through and so I am very relieved to know that all is well.

NOTICE: SOMETHING HAS GONE TERRIBLY WRONG WITH MY WEB SITE OVER NIGHT! WHEN I WENT TO ONE PAGE OF MY SITE A FEW MINUTES AGO, THE FOLLOWING AD POPPED UP AT THE TOP OF THE PAGE. I WANT EVERYONE TO KNOW THAT I HAD NOTHING TO DO WITH THIS AND AM VERY ANGRY ABOUT IT. I HAVE ALREADY CONTACTED MY WEB HOST ABOUT THIS.  ALSO, THE MUSIC PLAYER AND THE VISITOR MAP HAVE DISAPPEARED. PERHAPS SOMEONE HAS HACKED MY WEB SITE. I CERTAINLY APOLOGIZE FOR THIS MESS.

Just to let everyone know that Mark, my web-host/administrator went into his office even though it is Saturday and got this whole problem on my web site straightened out. Everything is back to normal now. Mark says it appears that the ad somehow was generated by Facebook because I was going to my site from having been on Facebook. No idea what caused some of the other problems, but they are fixed now. My thanks to Mark.

I received a gift from Jesse this past Thursday along with a letter.  Below is the photo of the lovely necklace along with a tiny excerpt from his letter explaining to me about the origin of the necklace.  I enjoy sharing things such as this with my visitors.

Lots of love and hugs of thanks to Jesse.

PLEASE VISIT THE BELOW LINK: