This web site content is Copyrighted by LindaHoodSigmonTruth.com May 24, 2009  All rights reserved.

Because the following three pages were created at separate times, you will see that there is some duplication of material within the three pages.

THE TRUTH ABOUT WHY ELVIS/JESSE DID NOT APPEAR IN 2002

UPDATED INFORMATION AS OF MONDAY, SEPTEMBER 9, 2013

This topic is a very “sore spot” with me emotionally and I find it quite disconcerting to relive this unpleasantness as I reconstructed these articles.  I have recalled every detail about which I have written to the very best of my ability.  There are, of course, details which I have chosen to keep private.  But, I believe that I am furnishing enough documentation to clear up the fact that the reason that Jesse did not fulfill the promises made by Hinton, Felix-Johnson and Jerry Presley was because Jesse DID NOT MAKE THOSE PROMISES HIMSELF.

Felix-Johnson was the one speaking with Jesse due to the fact that Hinton had done something very stupid which had caused Jesse to choose not to speak directly with him after Sept. 2001.  In 2004, Hinton contacted me via Emails asking that I patch things up between him and Jesse.  He stated that he had done things which he was told to do by LFJ who said that the directions came from Jesse.  Hinton, at that point in time, had come to realize that LFJ had lied to him…at least that was his story in 2004.  Any way you slice that cake, there were lies being told all around evidently.

The thing that bothered, and still bothers, me the most about the whole situation was that, because LFJ and I both have the same first name of Linda, they were allowing people to whom they showed Jesse’s letters to believe that she was the “Linda” in Jesse’s letters which he wrote to Hinton and which were published in the book.  She was NEVER mentioned in a single one of those letters.  Hinton weaseled her into the whole thing very late in the process of writing the book behind my back.  The places in the book in which she is mentioned are in Hinton’s acknowledgements in the front of the book and the letter which she wrote which appears at the end of the book.  She even lied in that letter making it appear that she had been involved for a long time.

I do know that Hinton and Felix-Johnson were telling Jesse lies about me in an effort to destroy the friendship between Jesse and me…as well as that between our go-between and Jesse.  They wanted Jesse to break all ties with everyone except themselves.  Needless to say this put a great strain on my friendship with Jesse.  There was a period of time when Jesse and I were not in touch as I just stepped aside to let things play out as they would.  Thankfully, we came together again and are closer than ever before all that happened.

Hinton has been a very shocking disappointment to me.  Had I known that he would turn out to be the liar and traitor that he has proven himself to be, I certainly would have NEVER introduced him to Elvis/Jesse.

The most shocking thing that I have learned about Hinton is that he bought and paid for a GPS device for Eliza “Presley” to endeavor to smuggle hidden inside a gift to Jesse.  Fortunately, it was intercepted by our go-between.  Then Hinton and Eliza cooked up another scheme to get a good friend of mine to agree to try to smuggle another GPS device to Jesse via mail through me to Jesse without my knowledge.  Thankfully, this person was a true friend to me and Jesse and would have no part of it and immediately called and told me about BOTH of the GPS devices.  Thus they were both averted.  Her intention had been to actually track the packages right to Elvis’s own home in order to show up with cameras, media, etc. to expose him.

Here is a copy of that invoice showing that it was bought by Hinton and shipped to Eliza McFarland which is Eliza’s married name…she divorced and then later changed her name to “Presley“. 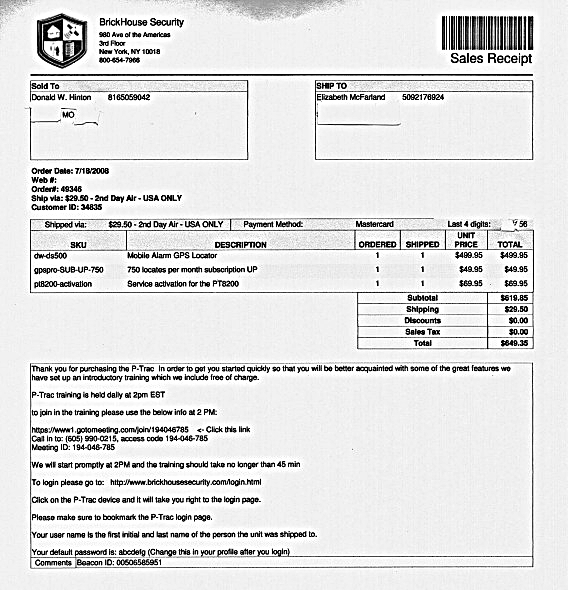 Please right-click on the above image and choose to open it in a New Tab, then use the little magnifying glass icon to enlarge to see it more clearly.

I have been told that Hinton was also involved in another scheme to use night vision equipment to spy in an effort to catch Jesse.  This also was one of Eliza “Presley’s” plans.

Ego and greed are terrible taskmasters once they take root in one’s heart, mind and soul…

This web site content is Copyrighted by LindaHoodSigmonTruth.com May 24, 2009  All rights reserved.