THE FOLLOWING IS AN UPDATE TO THIS ORIGINAL PAGE:

Here are the two most important statements from Jesse’s letter to me (shown below).

“….This tape is something else but what he is doing to all those people is just not right!” (He is referring to the tape which I sent him of the May, 2002 FOX 8 report.)

“I did everything when the book came out (Elvis What Happened?) to dislocate myself from that image. It meant leaving all together. Does the Dr. actually think I will allow it to happen all over again? Why?“

The letter which I am displaying below was received by me from Elvis/Jesse on July 6, 2002.  It was written in response to a video of the FOX 8 interview with Dr. Hinton which I had sent to him.  I am displaying it here for the very first time publicly.  I have asked Elvis/Jesse for permission to display it on my site.  He and I spoke on Friday, July 9th.

My purpose in displaying it so very prominently is to put to rest, once and for all, the lie which was repeatedly told by Dr. Hinton and his associate, Linda Felix-Johnson.  They told in interviews and to people privately, that Elvis was going to “come out” by the end of 2002.  I knew this to be untrue and I  made them aware that I had this letter. I told them that if I should make it public, it would blow them out of the water.  They totally ignored my messages to them about this matter.

Because I was repeatedly hearing them, or hearing about them, stating that Jesse was going to make a public appearance in 2002, I did ask Jesse if it was true that he was planning to come out.  His exact words to me were “Of course not!“

You may visit my two pages devoted to this topic to see my earlier detailing of these events.

I have other letters from Elvis/Jesse in which he again indicates these same sentiments…that he had told no one that he would “come out“.  Jesse had told me to not believe anything unless I heard him speak the words or saw it in his own handwriting.

They were publishing on Hinton’s web site that they were speaking with Jesse frequently and that he was telling them this and that.  Jesse told me that they were making things up to put on their site.

I hope that this will settle this matter.  So many people lost confidence in the fact that Jesse is Elvis because of the false promises made by Dr. Hinton and his associate.  I have suffered greatly because people turned on Elvis/Jesse and, by association, me because Elvis did not “come out“.  Hinton exposed my real identity when he, behind my back, chose to put his real name and face on the book after we all agreed to remain anonymous in the published book.

Their false promises are the root cause of my having a web site now. 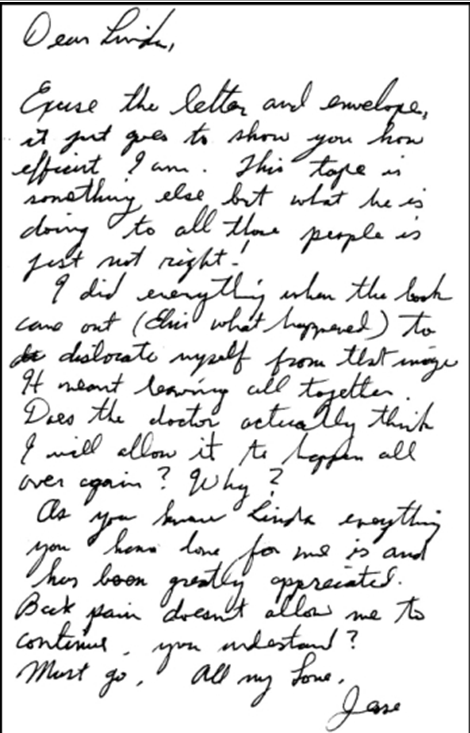