All web site content is Copyrighted by LindaHoodSigmonsTruth.com May 24, 2009 – 2020  All rights reserved.

PLEASE NOTE:  ON THIS PAGE THE OLDER ARTICLES BEGIN AT THE BOTTOM OF THE PAGE WITH THE MORE RECENT ARTICLES APPEARING FIRST FROM THE TOP.

On the following video you will hear Gene Smith explain that he did not believe it was Elvis in the coffin…this after standing and studying the form in the coffin.

This video is owned by: AmKonDOTnet

Here is the clickable link: youtu.be/DE9piEgjLQ0

…regarding a phone call which Gail Brewer-Giorgio received from Elvis, himself, in October, 1988.  Gail was asked not to tape the call but she did so.  The following will explain the situation and the subsequent proof which was sent to Gail by Elvis through his lifelong friend and first cousin Gene Smith.  Gail played this tape for my husband and me privately when we visited in her home in January, 1990.  So, I was so fortunate to hear it before it was made public later on with one of Gail’s subsequent books

After hearing the phone conversation which she had with Elvis in October 1988 in which he was so supportive and complimentary of her as well as his stated intentions of hoping to be able to reveal that he did not die, I was so steadfast in my support of Gail and my loyalty to Elvis and Gail.  I lost contact with Gail and later Jesse, himself, told me during one of our phone conversations that “I don’t want that woman to make any more money off of me.”  He did promise Gail, in that phone conversation, that he would send her ammunition.  He followed through on this promise by having his closest lifelong friend and first cousin, Gene Smith, phone Gail on Palm Sunday.  Gail and I were close friends at that time and she shared all of this with me as it unfolded.  I was so very blessed and privileged to have had Gail’s friendship and I still treasure that time and those memories.

Gene told Gail that if she would have the handwriting on the death report analyzed, she would be able to prove that it was written by Elvis himself.  Gail did follow through on this and, just as Gene told her, it definitely did show that Elvis did, indeed, fill out the death report in his own handwriting…thus the weight being shown as 170#.

Then today, I added the following regarding the above from yesterday:

UPDATE TO YESTERDAY’S ARTICLE IN WHICH I TOLD OF ELVIS PHONING GAIL BREWER-GIORGIO IN OCT. 1988 WHICH LEAD TO THE SUBSEQUENT PHONE CALL, ON PALM SUNDAY, TO GAIL BY ELVIS’S CLOSEST LIFELONG FRIEND AND FIRST COUSIN, GENE SMITH.

I have just uploaded a brief YouTube video in which the document examiner shows the manner in which he analyzed the handwriting on the “death certificate”  i.e. Medical Examiner’s Death Report comparing it to that of known handwriting of Elvis Presley.  They do indeed match.  This was the result of Elvis telling Gail in his phone conversation that he would send her “ammunition”.

Below is my YouTube description which will refresh the information which I have shared about this previously.

I have had this clip saved for a long time…but, if I recall correctly, this clip is from the video “The Elvis Files” done by Gail Brewer-Giorgio.

This is one of the most compelling pieces of evidence that Elvis did definitely carry out the plan to fake his death.

Elvis phoned Gail Brewer-Giorgio in October, 1988 after seeing her on some of the TV shows regarding her book Is Elvis Alive? which was a New York Times Bestseller. During that phone call (which she taped against his wishes) he complimented her and wished her well saying he hoped people would treat her kindly. He told her that he would send her ammunition. Elvis’s closest life-long friend and first cousin, Gene Smith, phoned Gail subsequent to this phone call from Elvis. He verified later that it was Elvis, himself, who phoned her in Oct. 1988. During that first phone call, Gene told Gail that if she would have the handwriting analyzed on the “death certificate” that it would prove that Elvis, himself, actually filled out the form. Gail did have the document examined and compared to Elvis’s known handwriting and the results did, indeed, prove that it was Elvis’s handwriting on the document. The part that I enjoy the most is that he filled his weight in as 170#…perhaps because the wax dummy in the coffin was created when that was his weight when he was younger.

As I have stated several times previously, my husband and I visited with Gail in her home in January, 1990 and she played the tape for us.  As soon as I heard this tape, I absolutely knew it was Elvis speaking.  Later that year, Gail sold this tape as an accompaniment to her book The Elvis Files.  I felt very privileged to have heard it for myself before it was made public.  My gratitude to Gail for sharing it with us.

Here is the video of the document examiner’s statement:

Here you will see another page from Gene Smith’s book, which is described in more detail farther below on this page.  You will see that Elvis invited Gene and Gene’s wife Louise to Graceland early in August, 1977.  The private words which Elvis spoke to Gene are VERY significant.  Elvis told Gene the same thing that he had spoken to a number of other people “…so tired of being Elvis Presley“.   I am certain that Elvis knew this would be the last time that he would see Gene…a “goodbye” visit…and a “goodbye” comment. 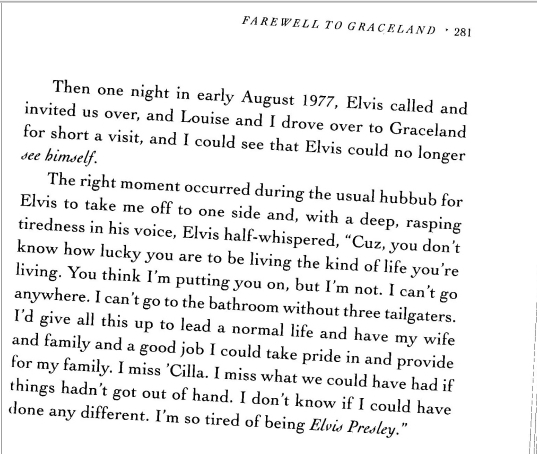 Gene Smith, who was Elvis’ first cousin and closest lifelong friend says that he did not believe it was Elvis in the coffin.

I will be quoting from and referencing the VHS tape THE ELVIS FILES which was written by Gail Brewer-Giorgio and distributed in 1990.   This film is copyrighted, so I cannot post the actual film footage of Gene’s comments.  However, below is the front and back cover of the VHS box.  I do recommend this tape if it can still be found anywhere for sale. Also, below you will be able to see two images from this video which I captured on my TV screen.  These are provided to show that Gene Smith was on this film.  Also, you will see a typed transcript of Gene’s remarks.

I was friends with Gail Brewer-Giorgio when her acquaintance with Gene came about.  In October of 1988, Gail received a middle-of-the-night phone call from a man who said he was Elvis Presley.  When we visited Gail in January, 1990, Gail played her tape of that phone conversation for my husband and me.  I immediately KNEW that it really was Elvis.  Later on, Gail released a portion of the taped call with one of her subsequent books.

Elvis was very kind and supportive when he spoke to Gail.  He told her she was doing a good job, that he had seen her on some of the shows, that he hoped people treated her kindly and that he would send her some  “ammunition“.  I believe that Gene was part of the ammunition which Elvis did send to Gail.

Gene later told Gail that it was Elvis who called her in 1988.  Gail asked Gene if he would come to the filming of the first Bill Bixby show to film a statement.  She told Gene that there would be no questions and he could say whatever he wanted to say.  Gene told Gail that he would have to get back to her about that. So, that is the background of how Gene’s statement came to be filmed. 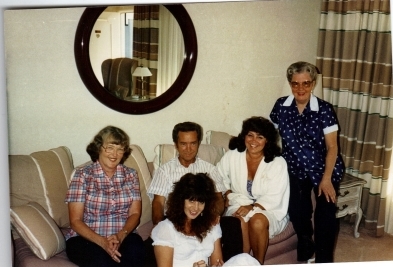 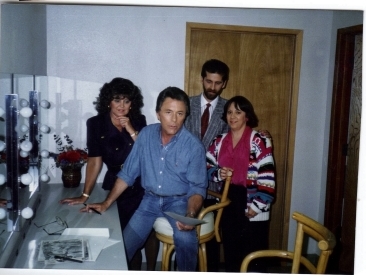 I wholeheartedly recommend Gene’s book.  I don’t know if it is still in print though.

Sadly, Gene has passed a way. 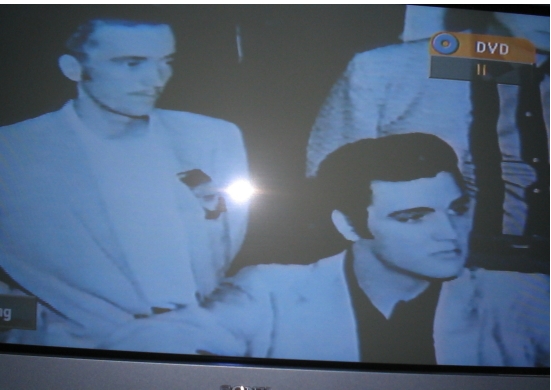 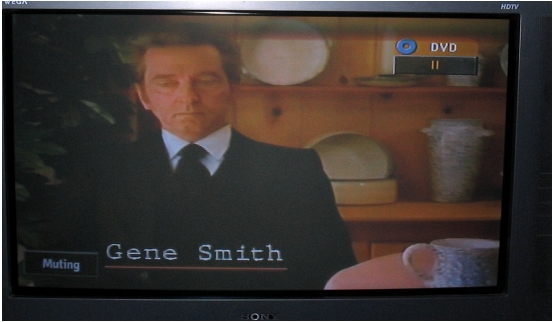 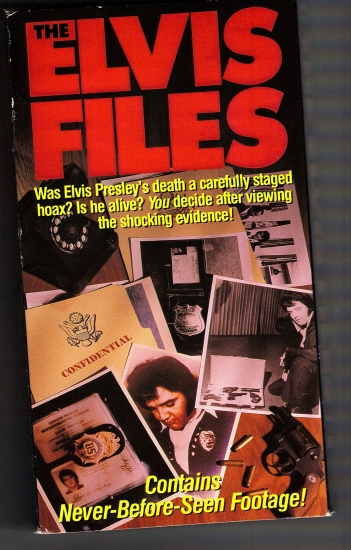 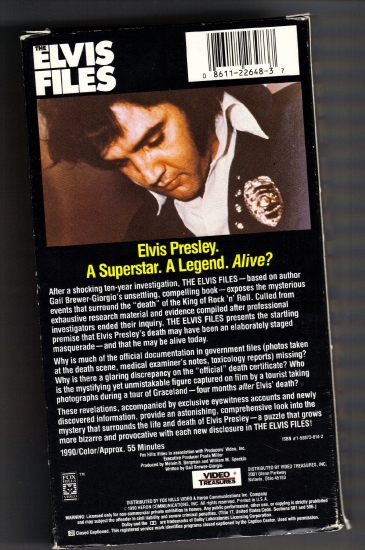 The announcer:  “…Elvis’ cousin, Gene Smith, who remained close to the King throughout his life.  He also did not believe that the body lying in state in the open coffin was that of his cousin, Elvis Presley.“

Gene Smith:  “When we viewed the body for the last time, I stood there quite a while looking at it…looking at his hands. Of course he was always breaking bricks with his hands.  He had calluses on the bottoms of his hands and big old rough looking knuckles.  His nose looked kind of puggy looking and his right side burn was sticking out , straight out, it looked about an inch. …and his hairline looked as if it was a hair piece, something glued on.  It just didn’t look right.  And his hands was just as smooth as a new born baby’s behind, you know.  And it seemed like it was sweat around his hairline, it could have been sweat, it could have been glue…I don’t know.

But I just didn’t believe it was him.“ 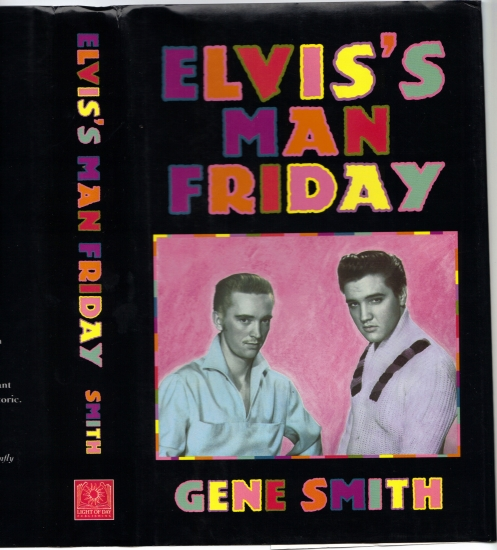 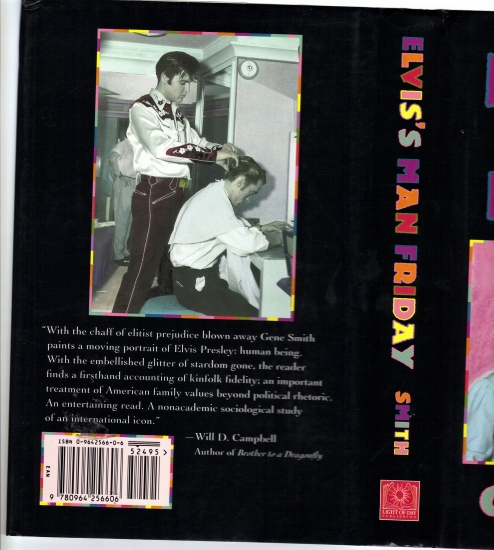 THE FOLLOWING IS THE NEXT TO LAST PAGE OF GENE’S BOOK.  TAKE SPECIAL NOTE OF THE LAST SENTENCE WHICH IS FINISHED ON THE NEXT PAGE: 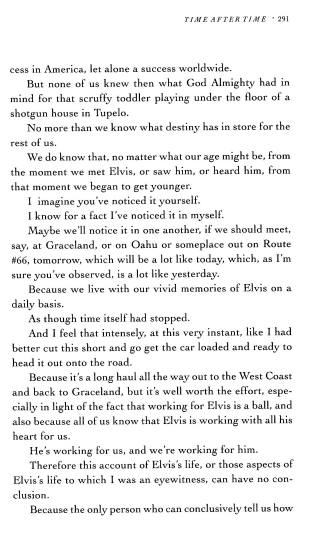 THE FOLLOWING IS THE VERY LAST PAGE IN GENE’S BOOK

PLEASE NOTE:  Sivle Yelserp is the backward spelling of Elvis Presley which was sometimes used to avert attention to Elvis…a code name. This is mentioned earlier in Gene’s book. 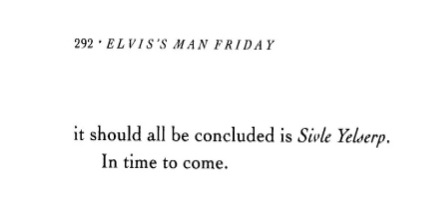 I remind each of you of the words which Elvis spoke to Gene in early August, 1977 during a private visit and conversation with only Gene:

“I’m so tired of being Elvis Presley”

As shown above earlier on this page…once more:

All of my original web site content is Copyrighted by LindaHoodSigmonsTruth.com May 24, 2009 – 2020.  All rights reserved.