Copyright LindaHoodSigmonTruth.com May, 2009- 2014  All rights reserved.

Jesse called me this afternoon.  He is doing pretty well.  He and I both have been feeling kind of down so we cheered each other up a bit.  A call from Jesse is the best medicine in the world.  It was a pretty afternoon where he is and so he said that he was going out for a ride and hopefully that would lift his spirits.  We talked about our little family of pets and he asked for another video of our little Rascal (prairie dog) and so I will make a photo in lieu of a video.  I have never thought to ask if he has any pets, but today I did ask him.  He said he has a little cat.  We agreed that a dog would be a lot of company for him and he said he will maybe look into that.  No news to tell this time…but thought everyone would like to know that he did call.

Below is a too cute cartoon which my good friend, Lucilia, shared with me on Facebook.  Love this so much…

Truly a diamond among the rough…

My good friend, Susan, found the following video on YouTube and shared it with me via an Email.  This is my favorite of Jesse’s songs on the 15 song CD.  I just love the way he changed the words to make them be about his leaving us…and how things changed for him and ended for him.  So sweet.  I love to see Elvis in red suits and don’t get to see them as much as the other colors, so this video is very special to me.  My compliments to the lady who created this beautiful video to accompany Jesse’s beautiful song.

My thanks to Susan for sharing this with me.

Singer Lisa Marie Presley has been forced to cancel her planned 2014 tour. She was due to launch the trek at the Dakota Jazz Club in Minneapolis, Minnesota on Tuesday, May 6, which is tomorrow, but has canceled her whole tour. LMP has a back problem that was aggravated by rigorous touring on which she embarked last year. The singer and daughter of the King aka Elvis Presley hopes to resume touring in 2015.
—Maggie Pannacione
05.05.14

TUPELO, Miss. (WTVA) — The City of Tupelo is accepting bids for a project that officials say will connect the cultural roots of Tupelo with its downtown.

The Downtown Main Street Association says the Elvis Presley Birthplace Trail project was recently authorized by the Federal Highway Administration and Mississippi Department of Transportation to advertise for bid submissions.

The project will include construction of overlay, roadway and bridge widening, curb, sidewalk, striping and traffic signalization from Green Street in downtown Tupelo along East Main Street, Veterans Boulevard and Reese Street.

The City of Tupelo will receive bids at 10 a.m. on May 29 at the Tupelo City Hall located at 71 East Troy Street. 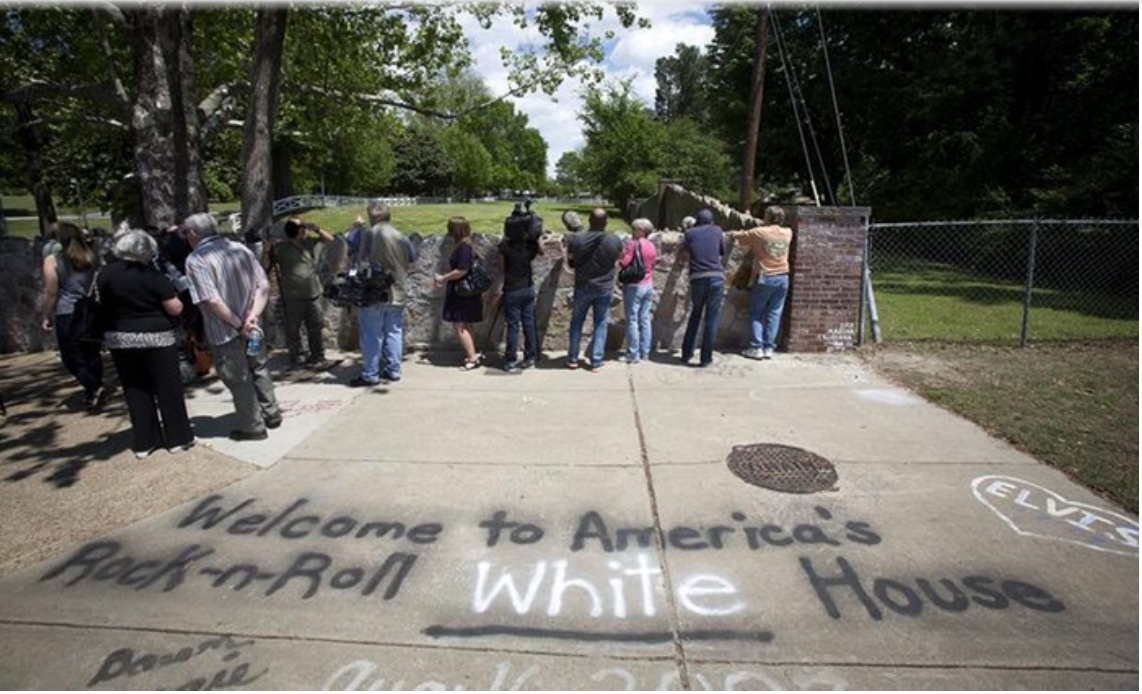 British Princes Harry and William toured the home of The King in Memphis, Tennessee over the weekend as they checked out Elvis Presley’s Graceland mansion as part of a pal’s pre-wedding celebrations.

Guy Pelly invited the royals to join him as he said goodbye to his single years with a trip to Elvis’ pad on Friday – the day before his wedding at the Hunt and Polo Club Grounds.

Below is another example of the amazing resemblance of Elvis to the Statue of Liberty.

“And it must occur in that day that there will be the root of Jesse that will be standing up as a signal for the peoples.  To him even the nations will turn inquiringly, and his resting place must become glorious”

Yesterday, my site reached it’s 500,000 th visitor.  I had intended to be on line watching at the moment that it took place in order that I could capture the image and post it on here.  But fate had other plans in that my AT&T DSL lost communication for all of yesterday afternoon.  By the time they were back up and running, the site had 500,133 visits and so the big moment had passed and I missed it.  Kind of the story of my life lately. LOL  Below is the current image this morning showing the number at the moment when I captured the image.

I want to thank everyone who has made my site the success that it is.  My thanks go to God, Elvis/Jesse, my visitors, and my kind web server, Mark who made it possible for my web site to still be in existence when he rescued it from the act of sabotage back almost three years ago.

It is an act of synchronicity or irony in that this month marks the 5th year anniversary of the establishment of my web site.  It was just about this exact time 5 years ago that I began work on setting up my web site.

For those who were not around 5 years ago, I would like to explain to everyone that the ONLY reason for the beginning of my web site was in order that I could have a presence of my own on the Internet which would come up if any one did a search for my personal name on the Internet.  There were two presences on the Internet which had painted a totally untrue and very slanderous portrayal of me.  I wanted to make sure that if any of my personal friends and family were ever to do a search for my name that they would see my own truth about myself rather than the outlandish lies which had been propagated on the Internet.  With that in mind, I want to thank those poor misguided fools who prompted me to create this site to tell the truth about myself.

So, a big thank you to:  Paul Monroe for his lies about me on Elvis Information Network; Nigel Patterson at Elvis Information Network for his rude refusal to even consider removing the Monroe lies about me during the time that I communicated with him in an attempt to defend my self;  Barbara Lee Rowe who approached me via Suzanne Stratford (who did all of the FOX 8 news reports about Jesse)…pretending to believe me and to be a friend only to turn around and create a web site filled with lies about me and Jesse.

Then I also would like to thank the self proclaimed “Elvis Experts” who so viciously attacked me personally via Emails and also by posting their lies about me on the Internet in order to try to intimidate me into closing my web site and to discredit me in order to cripple my web site.  Those names are:  Patrick Lacey, Cory Cooper, Steven Roberts, Elvis Information network, Elvis Express Radio by Joe Krein and Lee Dawson.  Also, Phil Arnold who told me that he could have been a big help to me and my site if I had furnished him with a photo for proof…guess I didn’t need his help after all.   There is also Billy Stanley who lied during an interview saying that the video which I had of him on YouTube making a definitive identification of Elvis in a photo was a lie.  And others who have attacked me viciously and who I have spent countless hours refuting and fighting back against their false accusations and slander.  Then there is A. J. Robbins who launched her own private campaign against me on the Internet via gossip on the forums and on Rip-Off Reports.  There are also the fraudulent “Elvis imposters” who fight against me in order to continue making money off of the people who they deceive…Jon Cotner being the most prominent of these liars.   Also, my first web host Tip-Top who allowed my site to be sabotaged and destroyed about 2 years ago.  Hats off to all of these people, plus others too numerous to mention,  who were the gas-on-my-fire of telling the truth and defending Jesse, WHO IS ELVIS.

I could have never found the fortitude and patience to continue on day after day to prove the truth on my web site without the constant battle with these poor misguided people who made it their obsession to discredit me and Jesse.

So, I am very satisfied to have maintained my 24/7 vigil to accomplish the success of my web site.  Half a million visits ain’t bad for a nobody like me who does not have the “blessings” of the big name official Elvis web sites, etc.

I also would like to thank all those visitors who have chosen to become registered members of my site.  As I have always stated, there is absolutely no requirement for registration to visit and view every single thing on my web site.  The only time that registration is required is for those who wish to post a message to Jesse or to have posted on the now-discontinued Blog Page.  So, I must assume that others only registered to make themselves “count” as supporting my site.  Below you will see the number of registered members.

I asked Jesse if I could use my real name to defend myself and he said that I could and that “You can use my name too.”  So, that was the beginning of the now 100+ pages of truth and documentation.  Most of all,  I thank Jesse for giving me his permission, approval and support in order that I could have the opportunity to set some of the record straight.

Judging  by the visits (shown below) just within the past hour, I feel confident that all of you will continue to make these numbers grow only to show support for Elvis/Jesse.   I am certain that your attentiveness to him now as Jesse makes him feel good.  As he told me once, “I don’t get to hear from the fans much anymore.”

I thank everyone for making this happen to show love and support for Jesse; and the continued interest in Elvis which shall never end.

I have certainly learned the following lesson the very hard way.  I’ll try to remember this admonition in the future.

Do not try to force guidance on someone who is not willing to learn.

My friend Carol shared the following YouTube video with me on Facebook.  I love the song so much and the introduction to the song is very touching also.

I HAVE BEGUN A NEW PAGE FOR THE REMAINDER OF MAY, 2014

Copyright LindaHoodSigmonTruth.com May, 2009- 2014  All rights reserved.